As coordinator for Project DAWN, Amy Holthusen, MPH ‘15, has helped distribute more than 18,000 opiate overdose reversal kits to communities across Ohio in the throes of the opioid epidemic.

Leslie Dawn Cooper struggled with addiction for years until her untimely death in 2009. The Portsmouth, Ohio, resident overdosed on oxycodone at the age of 34. If someone else was present at the time of her death, a witness intervention could have saved Cooper’s life.

Project DAWN (Deaths Avoided With Naloxone), a program at the Ohio Department of Health, works to reduce opioid overdose deaths like Cooper’s through community-based drug overdose prevention trainings. The program also distributes naloxone, an opioid overdose-reversal medication, free of charge. Since 2012 Project DAWN has spread from one site in Portsmouth to more than 70 locations throughout the state of Ohio.

Amy Holthusen, MPH, a 2015 graduate of the College of Public Health, has served as coordinator for the program since May 2016.

“We find that with most overdoses, someone is there; the person is not alone,” Holthusen said. “That’s sort of a missed opportunity because the fact that someone else is there, had that person had naloxone on them, they could have saved Leslie or someone else who is overdosing.” 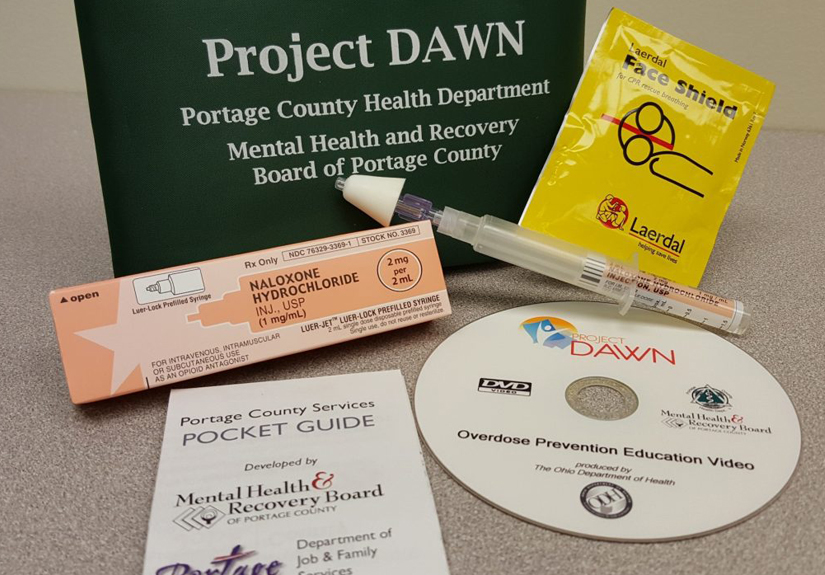 A Project DAWN kit including naloxone and educational materials, distributed by the Portage County Health Department in Northeast Ohio.

As of the end of 2017 there were 72 Project DAWN naloxone distribution sites in Ohio, where anyone could acquire an opioid overdose reversal kit. More than 18,000 Project DAWN kits were distributed to communities throughout the state, resulting in the reversal of more than 1,400 known overdoses in 2017.

“Most of our Project DAWN program staff are not prescribers, but because of the naloxone protocol, they can give it out,” Holthusen said. “What that means to the average Ohioan is you can go to any Project DAWN naloxone distribution site or participating pharmacy and get a kit, even if your doctor hasn’t written you a prescription for one. Anybody in Ohio can legally carry naloxone and administer it to somebody who is overdosing.”

Holthusen earned her Master of Public Health through the college’s executive program, Program for Experienced Professionals (PEP). Shortly after, she accepted her current role with ODH.

“[The PEP program] allowed me to work in my full-time job while I got my master’s degree,” Holthusen said. “I don’t think I would’ve pursued my master’s if that had not been an option for me.”

Although opiate overdose deaths like Cooper’s continue to devastate the U.S., leadership like that of Holthusen has created many success stories as well.

“When you hear people talk about the opioid epidemic in Ohio, there’s a lot of doom and gloom,” Holthusen said. “If you only hear about that part of it, you never hear about the people who live and succeed; who go on to live these amazing, fulfilling, valuable lives. When opioids become an addiction, recovery is possible.”

Public Health alums honored for leadership during pandemic, work in diversity and inclusion