From communicating with elected officials to leading organized policy research to calling for justice on social media, students and faculty at the College of Public Health are advocating for positive change in meaningful ways.

“We do the research, so I think it’s really important for us to go out and be active and fight for what we believe in,” said Shibani Chettri, a third-year PhD student in epidemiology who recently testified before the Ohio Senate as a proponent for declaring racism a public health crisis. “It’s important for us as students, especially, to find our voices.” 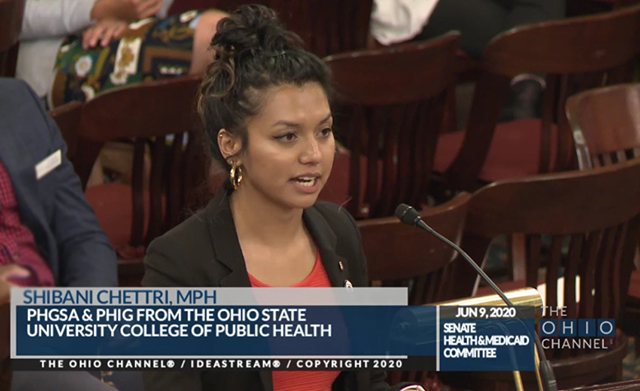 Chettri, whose research focuses on racial disparities in maternal health and infant mortality, said she’s naturally become an advocate for the issues uncovered in her work. Her rare opportunity to testify at the Ohio Statehouse arose as a result of her involvement in the Public Health Graduate Student Association, of which she is vice president, and the Public Health Interest Group at the College of Medicine.

When the groups learned the Senate was accepting oral and written testimony for a resolution to declare racism a public health crisis her peers encouraged her to take the lead, considering the close alignment with Chettri’s research and passions.

“It’s important to realize how much change you can help elicit as a student, and these student organizations provide a platform for students to come in and cultivate their interests,” said Madison Martinez, a third-year MD/MPH student and member of the Public Health Interest Group. “Having an organization to back you and help you talk to administration can be really important.”

“The only way to address health inequity … is to eliminate systemic racism through evidence-based policy,” she said at the Statehouse. “Declaring racism as a public health crisis is just the start of this change.”

Before switching to public health, Chettri planned to pursue surgery. But she said she began to feel a pull toward advocacy one summer while shadowing a gynecologic oncologist.

“I became aware of how important it is to fight for women’s rights and reproductive rights,” Chettri said. “When you’re a doctor you see one patient at a time. In public health, with your research and with policy advocacy, you can really impact a whole population at a time.” 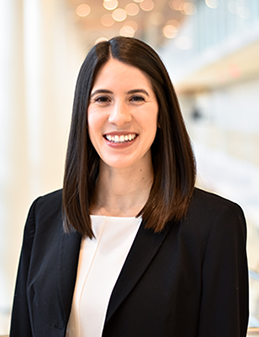 For Martinez, left, advocacy is about building relationships and finding ways to lift up other people’s voices. The outgoing president of the Public Health Interest Group, Martinez has advocated for issues at the university and beyond — from promoting the placement of menstrual products in both gender restrooms at the College of Public Health to calling for increased diversity among a national academic honors society.

“You don’t have to immediately find your passion when beginning in advocacy,” she said. “Find peers who are doing work you think is important and get involved in that, then see where your interests evolve.”

Martinez usually tagged onto other projects before coming up with the menstrual product idea on her own.

“It stemmed from seeing similar initiatives at local businesses I frequented,” she said. “I was eventually able to sit down with one of the deans and talk to them about the importance of recognizing that not everyone who menstruates identifies as a female.”

Both Martinez and Chettri urged students not to be afraid of getting started.

“It’s easy to feel daunted by advocacy work, but we can’t shy away from it — even when it’s polarizing or political,” Chettri said. “It’s important for us to be active for our communities.”