The 15 minutes it took one Columbus family to get tested for COVID-19 meant the difference between taking their unknowingly infected 7-year-old son to a birthday party, as planned, or going straight back home to set up a telehealth appointment with his pediatrician.

Breaking chains of infection like the one that could have unfolded at the party is the primary purpose of COVID-19 testing sites run by Ohio State public health students, who began operating the pop-ups last summer around central Ohio. Master of Public Health students Amanda Bleichrodt, Daria Faulkner and Sophia Padgett used the experience as part of their MPH practicum. The initiative was a collaboration between colleges of Public Health and Engineering, and the Battelle Center for Science, Engineering, and Public Policy.

With the support of Columbus Public Health and the Ohio National Guard, the team regularly set up testing sites at publicly accessible places such as libraries, parks and community centers. Piggybacking on events like the Far East Recreation Center’s community giveaway helped the team reach even more people. 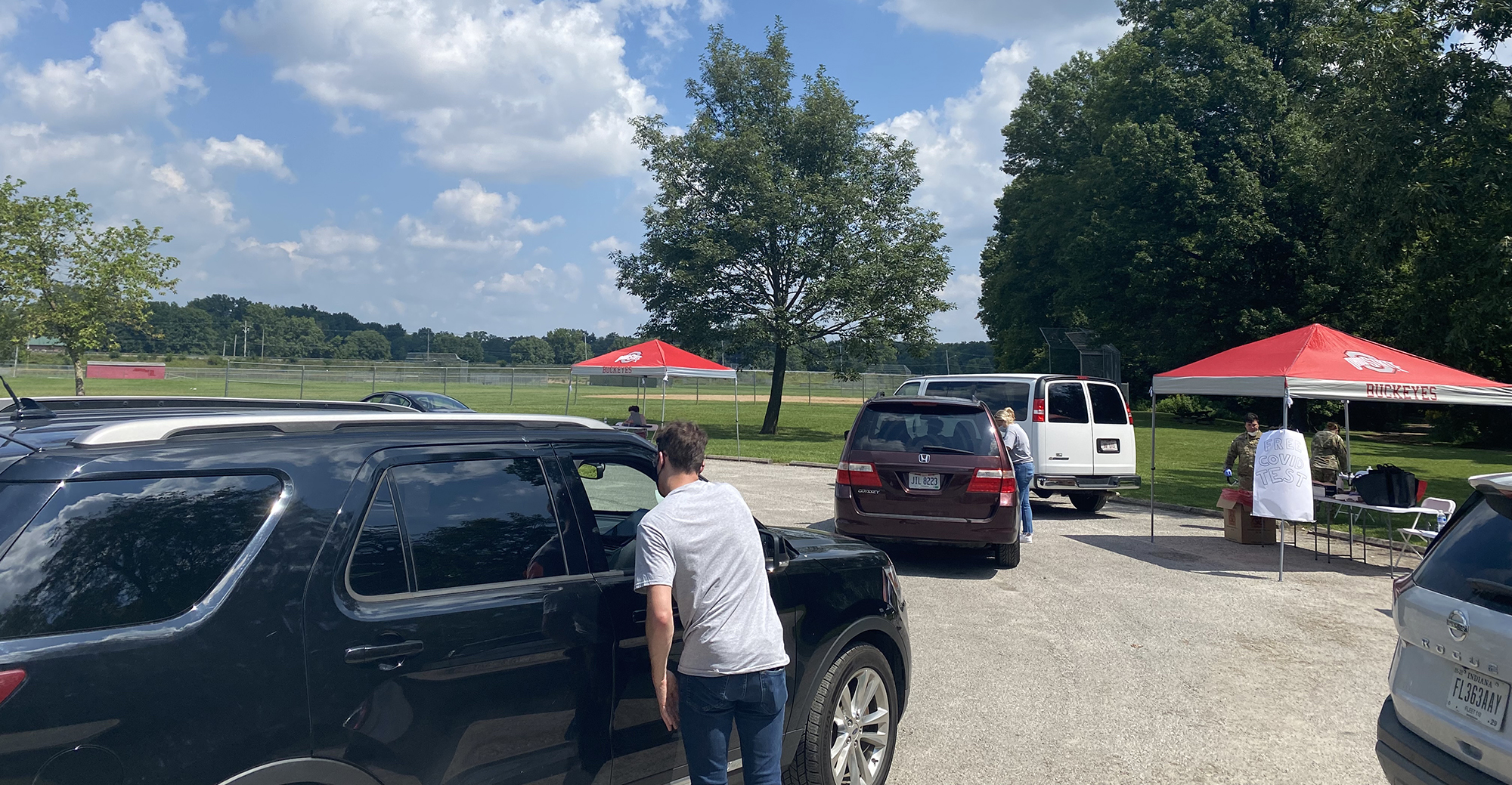 “The main goal was to bring testing opportunity into the community, which was especially relevant as the Delta variant spread, and we heard about more and more breakthrough cases,” Faulkner said, adding that the team also worked to provide testing to hard-to-reach populations such as those who speak English as a second language and people who are homeless.

The team offered testing at a men’s shelter run by Southeast Healthcare’s Friends of the Homeless program in east Columbus, and as well as two additional shelters in the area.

“Pandemic aside, health care is unfortunately not the top priority when someone is going through a homeless crisis — they’re looking to survive day-to-day,” said Antonio Caffey, director of homeless services for Friends of the Homeless Columbus. “COVID-19 has created huge challenges for our shelter.”

Caffey said the shelter operated at reduced capacity for over a year, and that he and his staff always do what they can to educate residents about COVID vaccination and testing, including referrals and bus passes to health centers. The Ohio State team bringing the testing directly to the shelter made it easier for residents to access services, he said.

“Going to the shelter was the most rewarding day I’ve had in years,” Faulkner said. “We had good participation, and the residents were very responsive and appreciative … you just feel like you did something right.” 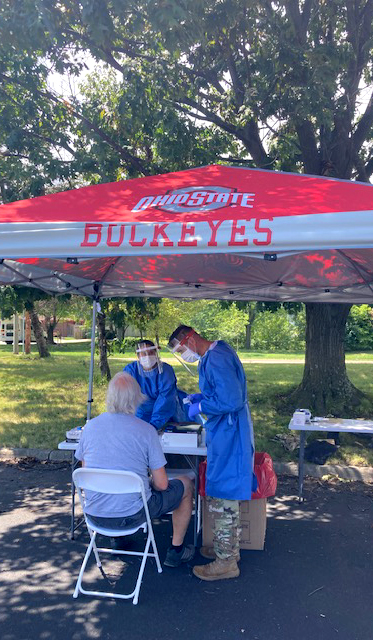 For MPH epidemiology student Sophia Padgett, the greatest value of the project has been the opportunity to implement her knowledge of public health outside of the classroom.

“It’s a lot harder putting it into practice than having the idea, and that’s something we’ve learned over these past few months,” Padgett said. “It’s been a continuous learning experience.”

Alongside over 100 individuals who were tested for COVID-19, the students also gathered data for a new algorithm that could eventually predict locations with high numbers of undiagnosed COVID cases. The data-driven approach began as a project out of Yale University to track HIV hot spots and involves partners from Ohio State’s Colleges of Engineering and Public Health and Ohio State’s Battelle Center for Science, Engineering and Public Policy. 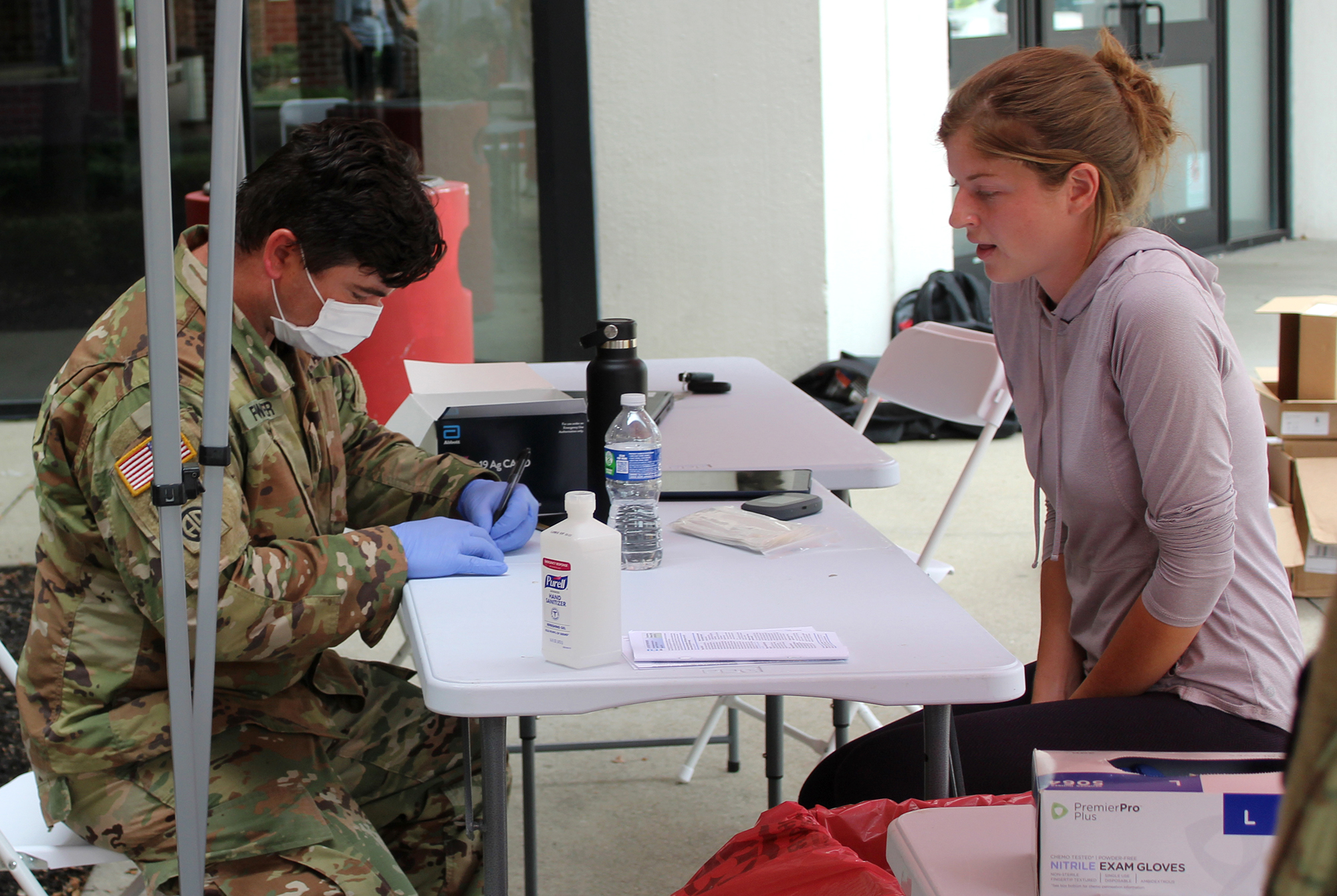 Troy Fowler (left), prepares to give a COVID-19 test at one of the team's pop-up sites.

Ohio National Guard Medic Troy Fowler, who administered COVID tests for the College of Public Health team, praised the project’s ability to immediately identify those who might be feeling COVID-19 symptoms but who haven’t yet had the opportunity to seek a test elsewhere.

Added Padgett, “It’s so important to meet people where they are.”

College announces 2021 Excellence in Teaching, Employee of the Year awards
*****