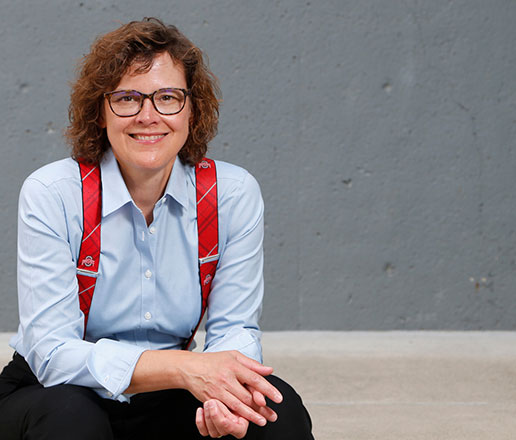 I care about students finding and being comfortable with their individual voices. I was the student in a room of 200 who always wanted to raise my hand, in part because I felt like I had a different perspective. But it took me ages of dealing with my pounding heart – well into my faculty career – until I truly developed my own voice. I had an excellent mentor who nudged, nagged and cajoled me until I figured it out. When I teach and lead I want to create a space where students know they are safe and also know that I’m not going to let their voices go unheard.

Amy Lauren Fairchild is a historian who works at the intersection of history, public health ethics, and public health policy and politics. Her work helped establish public health ethics—which is concerned with the well-being of populations—as fundamentally distinct from either bioethics or human rights. Whether exploring the tension between privacy and surveillance, immigration and border control, or paternalism and liberty, Fairchild assesses the social, political, and ethical factors that shape not only the potential and limits of the state to intervene for the common good but also what counts as evidence.

Fairchild has written two books: Science at the Borders: Immigrant Medical Inspection and the Shaping of the Modern Industrial Labor Force and Searching Eyes: Privacy, the State, and Disease Surveillance in America (with Ronald Bayer and James Colgrove). In addition, she has published in leading journals including the New England Journal of Medicine, Health Affairs, the American Journal of Public Health, Science, and the JAMA. The National Endowment for the Humanities funds her current book project: a social history of fear and panic.

A graduate of the Plan II Honors Program at the University of Texas at Austin, Fairchild received her MPH and PhD from Columbia University. She was on the faculty at Columbia for 22 years in the Department of Sociomedical Sciences at the Mailman School of Public Health. At Columbia, she served as Assistant Director for Academic Affairs in the Center for the History and Ethics of Public Health, Chair of the Department of Sociomedical Sciences, and Director of the Foundations module and Integration of Science and Practice in the MPH Core Curriculum. She continues to serve as Co-Director, with Ronald Bayer, of the World Health Organization Collaborating Center for Bioethics at Columbia’s Center for the History and Ethics of Public Health. Fairchild also served on the faculty at Texas A&M University. There, she was Associate Dean for Academic Affairs at the School of Public Health and Associate Vice President for Faculty and Academic Affairs at the Health Science Center.

Fairchild feels extraordinarily honored to serve as Dean of the College of Public Health at The Ohio State University. Any university with the chutzpah to have a poison nut for a mascot is the kind of place she wants to stay.

Areas of Research and Study