When asked about why she decided to work in public health, Maria Gallo, PhD, College of Public Health associate professor of epidemiology, thought back to when she was a Peace Corps volunteer in a small village in Nicaragua about 20 years ago. Gallo witnessed that people fell ill with a “mysterious hemorrhagic fever.” Until a team from the Centers for Disease Control arrived and identified the outbreak of leptospirosis, the cause was unknown.

Gallo says that “seeing a field investigation unfold in real life was powerful.”

That experience has since germinated into years of research focused on understanding, measuring, and preventing risky sexual behavior and related outcomes, such as HIV and other sexually transmitted infections, unexpected pregnancies, and unsafe abortions.

Gallo’s research received a boost this month with news that she was selected for a $100,000 Bill & Melinda Gates Foundation Grand Challenges Explorations Award. The funding will support Gallo’s research to “adapt a validated computer-based psychological test known as the Implicit Association Test to measure the implicit opinions of women in Vietnam on hormonal contraceptives in order to encourage use.”

Much of Gallo’s work has been centered on developing semen biomarkers as objective measures for sexual exposure. 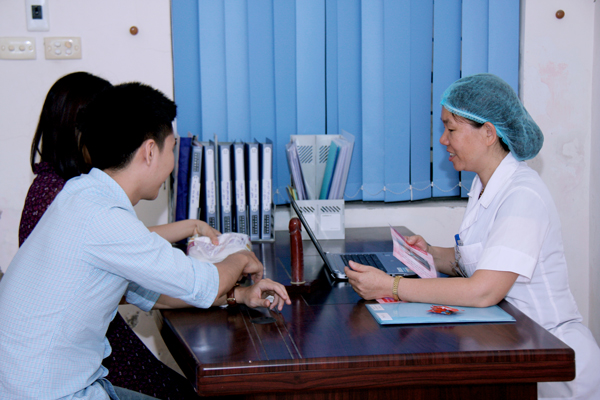 A health educator counsels a couple at the Reproductive Health Center in Thanh Hoa, Vietnam.

These biomarkers revealed to Gallo and her team that women might not be able to give good accounts of their exposure to unprotected sex. She and her team were not surprised by these findings and Gallo said that, “it is critical that we improve our research on sensitive topics by developing ways of measuring that don’t rely on self-reports.”

“I have been fortunate to have collaborated with amazing researchers and clinicians in countries including Jamaica, Madagascar, Kenya, and Vietnam.”

With the Gates award, Gallo will begin a new project that will build off of her previous research. Gallo explains that “in this new study, we will extend a validated computer based psychological test—the Implicit Association Test (IAT)—to collect implicit measures of beliefs about contraceptive safety and naturalness.”  The IAT is available online and is used to measure racial prejudices.

According to Gallo, the IAT is used in social psychology as an implicit measure of the association between two constructs and has proved useful in research concerning attitudes, self-esteem, and stereotypes. They are useful when people may be hesitant or unable to report their true feelings.

Using the IAT to measure women’s beliefs could “improve both clinical care to women and the quality of research methodology in the field of contraception,” says Gallo. 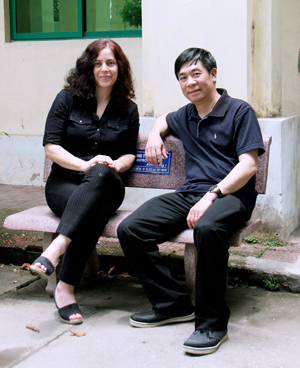 For her new project, Gallo will be collaborating with the Harold E. Burtt Chair and Professor in the Department of Psychology at Ohio State, Russell Fazio, PhD. Fazio was one of the first to examine implicit bias and to show that attitudes could influence behavior even if they are unaware of it. Physician researcher Nghia Nguyen, MD, PhD, will lead the data collection among contraception users and non-users in Hanoi, Vietnam.

Most of Gallo’s research involves testing behavioral or biomedical interventions in randomized controlled trials. Gallo conducts her research in low-resource communities in Africa, Asia, and the Caribbean. She believes that the most important factor for carrying out successful, rigorous, relevant and ethical research is having strong local partners in other countries.

“I have been fortunate to have collaborated with amazing researchers and clinicians in countries including Jamaica, Madagascar, Kenya, and Vietnam.”

Grand Challenges Explorations is a $100 million initiative funded by the Bill & Melinda Gates Foundation. Launched in 2008, over 1,228 projects in more than 65 countries have received Grand Challenges Explorations grants. The grant program is open to anyone from any discipline and from any organization. The initiative uses an agile, accelerated grant-making process with short two-page online applications and no preliminary data required.

Initial grants of $100,000 are awarded two times a year. Successful projects have the opportunity to receive a follow-on grant of up to $1 million. 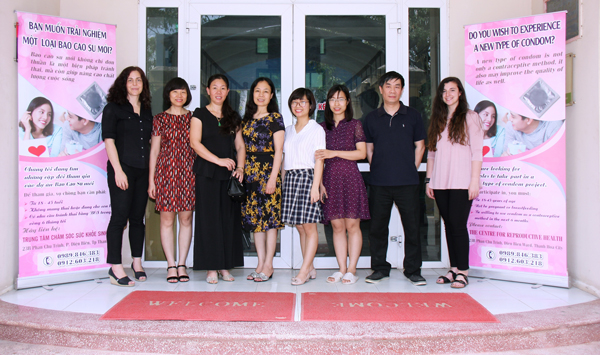 Maria Gallo, PhD, with members of the research team in front of the Reproductive Health Center in Thanh Hoa, Vietnam.