When Ohio Governor John Kasich passed through the sunlit atrium of the Ohio Statehouse one morning in early April, he noticed a meeting taking place with an all too familiar theme.

It was two days after Kasich gave his State of the State address in Sandusky, Ohio, where he discussed, among other needs, the opioid epidemic that has been ravaging his state. So when he stumbled upon a room full of education, health and government leaders discussing opiate abuse in Ohio, he seized the opportunity.

“We go all the way across the board…we’re going to see results,” Kasich said as he addressed the audience unannounced. “I believe we will see results, absolute positive results in the future; but we’re paying for the sins of the past.” 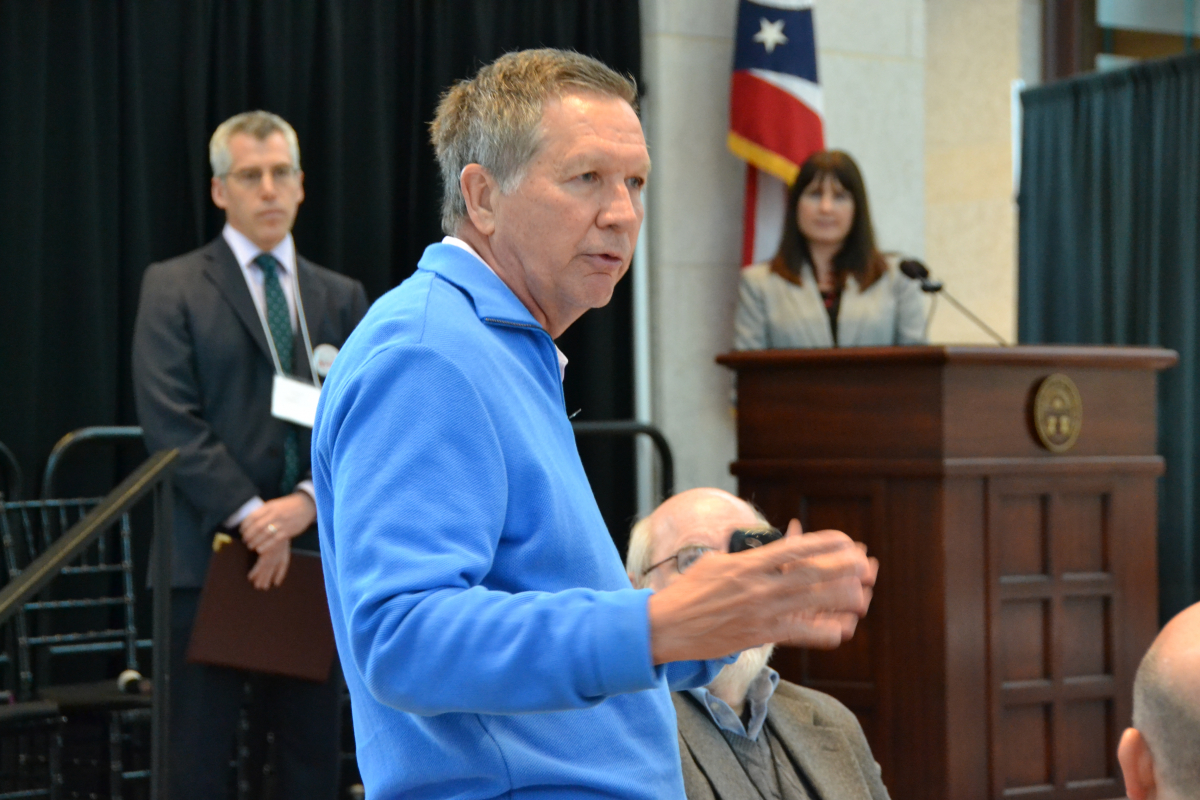 Ohio Gov. John Kasich addresses an audience of health, education and government leaders at the statehouse in April about Ohio's opioid crisis.

Governor Kasich’s impromptu speech offered some hope, but was laden with the reality of a crisis that in 2015 had Ohio leading the nation in opiate overdose deaths, according to a report by the Kaiser Family Foundation.

In this vicious opioid epidemic, Ohio is ground zero.

The meeting in April was one of several events organized this year by CPH Dean William Martin II, MD, that featured speakers and participants from Ohio State, local health departments, non-profits and other organizations on the front lines of Ohio’s opioid crisis.

In January 2017, Martin and OSU Extension director Roger Rennekamp, PhD, co-hosted a summit on Ohio State’s campus that invited experts from inside and outside of Ohio State to discuss their role in the crisis: what they’ve seen work and the challenges they face.

"We tried a number of novel approaches to highlight what was being done at Ohio State University because we already knew that was a major request of attendees," Martin said.

The event featured keynote speakers from the U.S. Department of Health and Human Services, Ohio Mental Health and Addiction Services, RTI International, and more. Additionally, experts from a wide range of disciplines shed light on the crisis from their angle with brief “ignite sessions.”

Judy Tansky, PhD, senior lecturer at Ohio State’s Fisher College of Business, discussed her effort to prevent ex-offenders from returning to prison through an entrepreneurship program. Other sessions focused on the roles pets play in the crisis, community outreach efforts by the Ohio attorney general’s office and the Ohio State College of Pharmacy’s “Generation Rx” initiative that distributes education materials on prescription safety.

Martin added that the primary goal he and Rennekamp had "was to galvanize OSU on this issue in such a way that we would have some actionable next steps."

Feedback from attendees of the event identified many barriers organizations and individuals face in fighting the crisis, most notably the lack of adequate funding and coordination, and the stigma surrounding substance abuse.

“One of the issues is the ‘us vs. them’ mentality that some people carry,” an attendee commented in a post-event survey conducted by CPH. “There is no ‘us,’ ‘them’ or even ‘me’ in this situation; there is only ‘we,’ and we have a problem!” 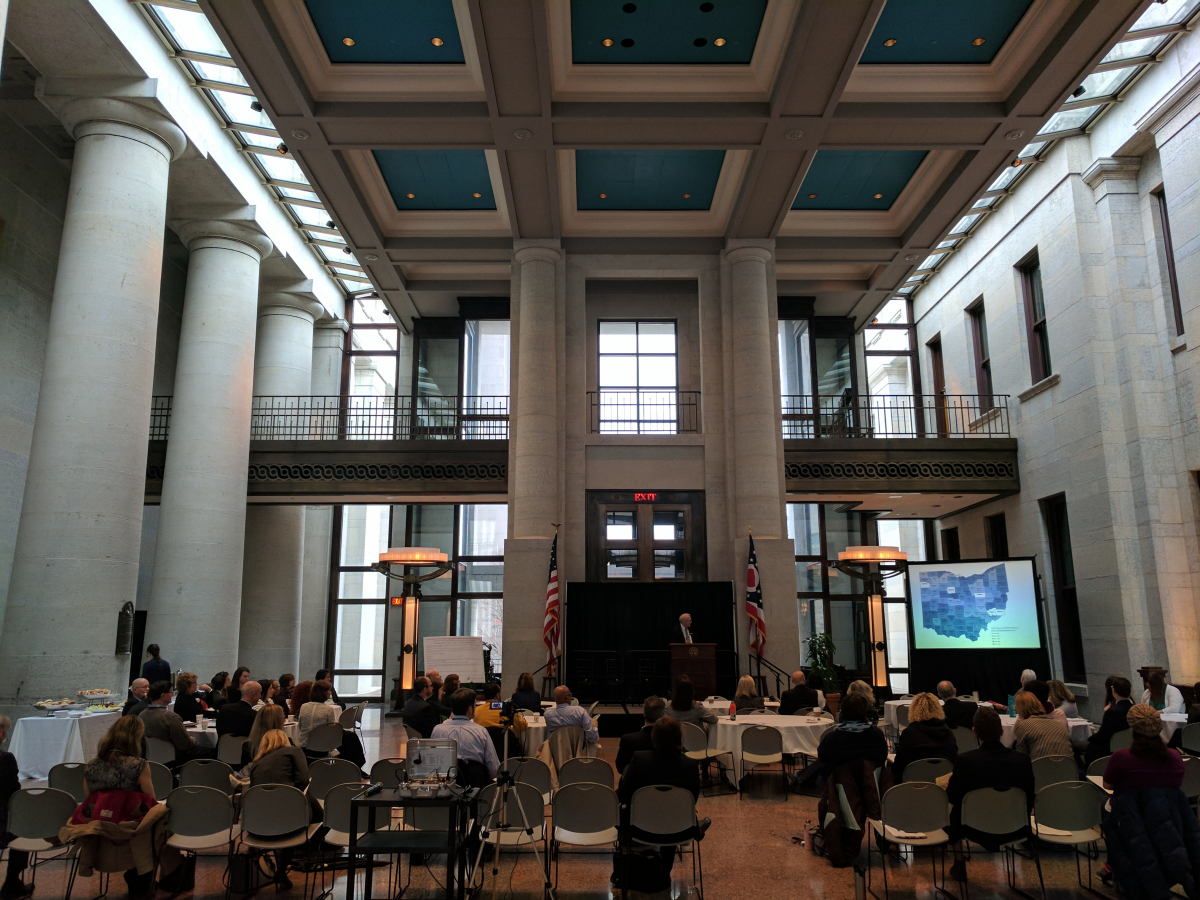 Mark Hurst, MD, medical director of the Ohio Department of Mental Health and Addictions Services, provides an overview of the opioid crisis at the Ohio Statehouse atrium in April.

Tucked away in the middle of Cunz Hall, CPH Director of Information Systems Don Shymanski keeps the lights dim as he oversees the cyber infrastructure that keeps faculty, students, researchers and staff pushing public health forward.

Yet, even after 15 years, it remains more than just a job to Shymanski; it’s a role in helping communities impacted by public health crises.

Shymanski’s home county of Ashtabula in northeast Ohio has been hit hard by the opioid crisis. Buried deep in the Rust Belt, the region’s diminished economy has many residents struggling to find work, and too often turning to substance abuse.

Shymanski fondly recalls the times he and his friend Eric spent fishing and hanging out in their early twenties. But in 2016, at the age of 42, Eric lost his life due to an opiate overdose. He left behind three children, including his 10-month-old daughter.

“As with everything, you lose track of people over time,” Shymanski said. “And then you wake up one day and they’re no longer around.”

Eric is one of too many friends and neighbors Shymanski has seen fall victim to substance abuse, overdose or suicide in his small hometown.

“People like Eric, who are wonderful people, their smile would light up a room,” Shymanski said. "And it’s this typical scenario of how you see these people fade away into the limelight. [The] smile on their face is nothing compared to what they’re battling inside.”

While he isn’t out in the field developing the public health solutions to combat these issues, Shymanski knows that his role at the college maintains a digital environment of collaboration, communication and security that allows others in the college to help reduce the pain and suffering he has witnessed back home.

“Just being involved here and seeing the work that’s done for all kinds of different things, … there’s an impact that we can make,” Shymanski said. “So anything that we can do here that can help out there is a great place for us to be.”

The study focuses on managing substance abuse and preventing complications like HIV, hepatitis-C and sexually-transmitted diseases among those who inject drugs—namely opiates—in Scioto, Pike and Jackson counties in southeastern Ohio. It is one of eight similar studies across the country, all sharing data and best practices.

“The real hope is that we can develop a deliberative plan that is generalizable, scalable; that can be expanded throughout the rest of the rural areas in Ohio and other parts of the country,” Miller said. “I’m hopeful that – coming from all the projects together—not just ours but the whole thing, there will be some sustainable strategies for bringing services to rural areas, because that’s really what it’s about.”

Miller will examine the opportunities to bring some of the under-used and often unavailable treatment and prevention methods to rural communities, such as medication-assisted treatment (MAT) and syringe service programs, commonly known as “needle exchanges.”

“A lot of the project is going in, seeing what’s there, but then listening to what people want,” Miller said. “It’s very open-ended, so it’s where the community takes us, really.”

Joining Miller on the project from the college will be: Pamela Salsberry, PhD, associate dean for community outreach and engagement; Andrew Wapner, DO, MPH, director of the Center for Public Health Practice; and Abigail Norris Turner, PhD, associate professor of epidemiology at CPH and of infectious diseases at the College of Medicine.

Miller will also be working on a project with assistant professor of epidemiology Kathryn Lancaster, PhD, which will inform his NIH study.

They, along with other colleagues, will perform a systematic review of the opioid epidemic in Appalachian regions: looking at what is published; what interventions have been developed and implemented; identifying trends; and building recommendations on where to go next. 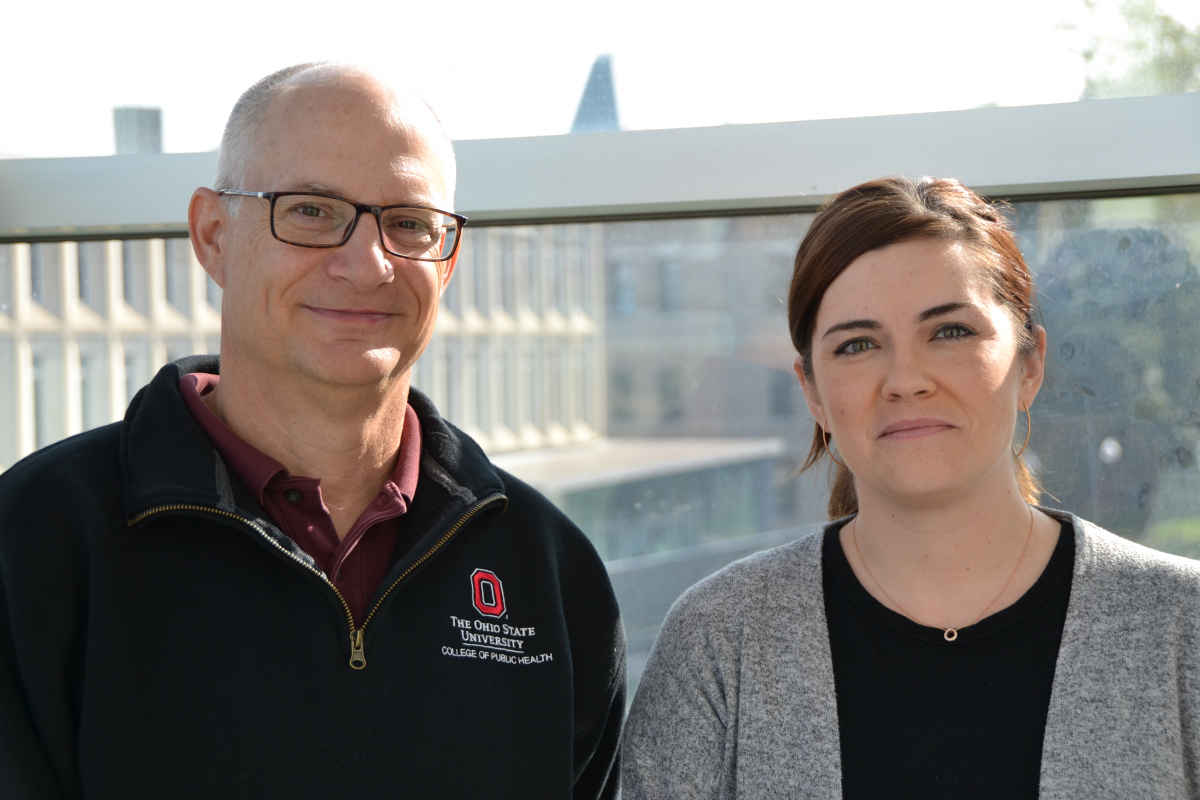 William Miller and Kathryn Lancaster of the CPH Division of Epidemiology are working on research studies regarding opioid use, treatment and prevention in rural southern Ohio.

Lancaster has studied the effectiveness of prevention, intervention and treatment methods related to intravenous drug use in countries like Vietnam, Ukraine and Indonesia. She anticipates parallels between her work abroad and the work she will be doing in rural Ohio.

“There are many similarities from areas I worked internationally in the sense of communities living in resource-constrained settings with limited availability to health care services like harm reduction,” Lancaster said. “Identifying and linking people who are using opioids in rural Ohio to the care and services they need has the potential to change the outlook of this epidemic.”

Lancaster said that one thing she has learned from her international work is that partnerships are key in order to hit the ground running.

“It’s necessary to develop the local partnership to gain that trust in order to not only start examining what is the current situation, what are the trends, but then also figuring out and determining what you do for next steps in addressing the issues.”

The NIH-funded grant is a big step forward for the College of Public Health in taking on the opioid crisis, but it is only one layer peeled back from a complicated onion.

“Ohio has these huge challenges in public health,” Martin said. “But we must learn to listen more carefully to the communites we serve. Helping communities help themselves is central to the land-grant mission of OSU, and it is clear that in the middle of a public health crisis, we're all in this together.”